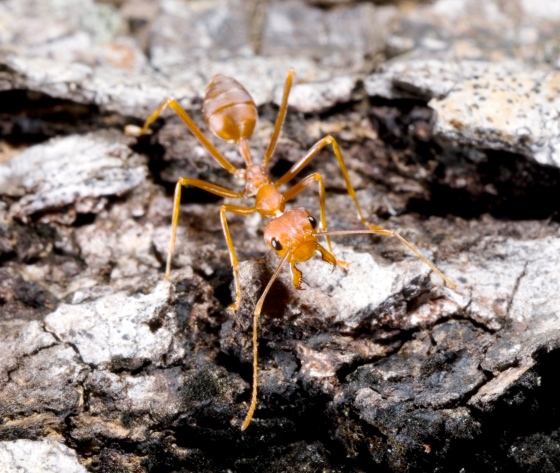 An elderly woman in Germany who heard her doorbell rung repeatedly late at night naturally called the cops. Although it seemed like the work of a prankster, officers uncovered a much smaller culprit: ants.

Police in Offenburg responded when the 75-year-old woman made a desperate call at 3 a.m. on Wednesday, the German news magazine Focus reported. But when they arrived, officers didn’t find anyone at the door. On closer inspection they found that ants had built such a large nest that it was pressing the doorbell components together to make it ring.

Although the brief news report didn’t identify the type of ant that caused the disturbance, the Guardian’s Patrick Barkham floated a couple of theories. Pharaoh ants or monomorium pharaonis in Northern Europe are attracted to electrical currents and have been known to swarm in Germany. Another suspect might be the Asian super ant lasius neglectus, which are fatally drawn to electrical currents and notably invaded a historic British manor several years ago.

Although it’s highly unusual for ants to announce themselves at the door, they do have sophisticated communication systems — so sophisticated that researchers at the University of York are working on outfitting a thousand northern hairy wood ants with tiny radio receivers. Thethree-year project is also intended to help the staff at the National Trust’s Longshaw Estate in Derbyshire manage the ancient wooded area where the ants live.

Back in Offenburg, the police ended up using a knife to cut through materials the ants had brought into the doorbell to make the connection. After that, the woman who’d made the initial call went back to bed. If only mosquitoes would ring the doorbell when they’re planning to come inside.