What will they think of next? Spinning Tough Spider Silk From Goat Milk 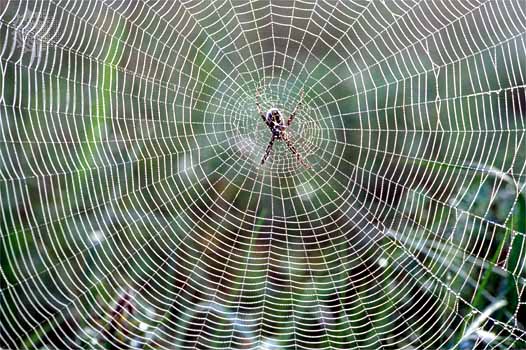 Wow, the things they can do these days are a bit like science fiction. It is hard to believe this is even possible. It is shocking and amazing…

It may be impossible to craft a silk purse from a sow’s ear. But one day, it may be possible to fashion a silk bulletproof vest from, of all things, goat’s milk.

For decades, scientists have been in awe of the lowly spider and the magical material it uses to spin its web. After all, strands of spider silk are a mere one-tenth the thickness of human hair, yet they can snag a bee traveling 20 miles per hour without breaking.

Ounce for ounce, spider silk is five times stronger than steel and about three times tougher than man-made fibers such as Kevlar. And that makes the material ideal for all sorts of interesting uses — from better, lighter bulletproof vests to safer suspension bridges.

But “harvesting” spider silk hasn’t been easy. Unlike silkworms, spiders aren’t easy to domesticate. “Spiders are territorial carnivores, they eat each other if placed in contact or in close proximity,” says Jeffrey Turner, president and CEO of Nexia Biotechnoloies, Inc. “It’s like trying to farm tigers.”

Now, researchers at the Quebec-based Nexia along with scientists at the U.S. Army’s Soldier Biological Chemical Command (SBCCOM) in Natick, Mass., say they may have figured a way out of the sticky situation.

In the latest issue of Science, the researchers report that they’ve managed to successfully create artificial spider silk that’s nearly as good as the real thing — and without involving a single spider.

How? Turner and his team of bio scientists took the genes responsible for creating spider silk into the cells of mammals, such as goats. Using those genes, the re-engineered goats were then able to produce in their milk the same protein that makes up spider’s silk.

Turner says that by isolating those proteins from the goats’ milk, they were then able to “spin” a thread remarkably similar to natural spider silk.

“On things like toughness and modulus of elasticity — the ability to stretch without breaking — we’re right on the money,” says Turner.

Not Quite There Yet

Still, Turner does say there are still many other factors that need to be worked out before we see bridges built with man-made silk.

For one, the amount of silk-building protein that Nexia has been able to produce has been limited to a few strands. And it isn’t clear yet how much protein may be able to be harvested in such a manner. Turner says his team expects to have a second research paper that would examine such details out by the end of this year.

And Nexia’s experimental silk strands aren’t an exact match — yet. Turner notes that they’re only 20 percent to 40 percent as strong as natural spider silk.

“We still have more work to do,” says Turner. “But to get this far is just a step forward.”

And moving even further forward is what really excites Turner and his military partners.

The most promising aspect of their research so far: The spider genes are faithfully passed on among the experimental goats. And that means producing more artificial silk might be as simple as breeding more of the genetically-enhanced goats naturally.

Since starting the experiment three years ago, Turner says Nexia’s flock in Montreal has grown to nearly 50 goats. Within the next several years he expects the flock to scale up to “several thousand.”

And as the company continues its research and grows out the herd, Turner believes that it won’t be long before we could see commercial applications. Nexia has already plans to market the material, dubbed BioSteel, for use as fine suture material and biodegradable fishing line by 2003 or 2004.

If all goes well by then, he says it wouldn’t be too much of a stretch to see lightweight body armor made of artificial spider silk within three to five more years.

ABCNEWS’ Ned Potter and Paul Eng contributed to this report.