Largest Crab in the World!

The Coconut Crab – The bigest land-living arthropod in the world!

The coconut crab is the largest land crab in the world. It can grow up to 60cm from head to tail. It is huge!

The tiny Christmas Island is the hangout for the largest remaining population of these gigantic crustaceans in the world.

That’s a lot of big crabs in a not-so big space! Like all true land crabs, the coconut crab spends most of its life on land.

In fact, the only time it takes to the water is to lay their eggs, after mating took place on land. So why is it called a robber crab? Perhaps because of its thieving ways.

The robber crab will generally come out at dusk to scavenge for food – dead food, live food, any kind of smelly food, really.

They often visit camps too where they open up tins. Just like other crabs, these guys have big and powerful front pincers (claws) which they use to tuck into their food.

The pincers are so powerful that the crabs can break open the hard shell of a coconut.

Of course, you are thinking, “oh, that’s OK … a crab can’t climb trees and take coconuts, so what is the problem?”

Problem is, these giant crustaceans can. That’s right. 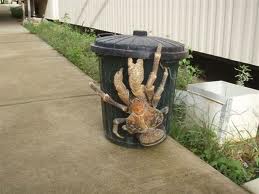 At night, when there is nothing worth munching on the ground, robber crabs climb up coconut trees and other fruit trees to find food to fill their big bellies. And like a true-blue Aussie, they don’t forget their mates.

Sometimes, a robber crab may climb a giant coconut tree shake it around a bit and let the coconuts fall to the ground for all his mates to munch on. This might be why the crab is known as the coconut crab.

Now we know that the coconut crab has lots of friends on Christmas Island, what with it being the largest colony in the world and all, what about relatives? Does it have any cousins? Perhaps a criminal crab? A lawless lobster?

It is hard to believe, but among the closest relatives of this massive crustacean is the itsy, bitsy, teeny, tiny hermit crab. Don’t believe it? Take a closer look at a little hermit crab and it looks a lot like its larger cousin … only smaller, of course.

But although the coconut crab is big and mighty, it is in danger. Because its meat is considered a delicacy in many islands, it is hunted and in some parts its population declined massively. 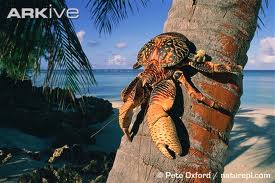